Home Arts How Picasso Got So Famous
Arts

How Picasso Got So Famous

Picasso is an artist I have admired for a long time on his various painting styles.  What many people dont know is he was painting and drawing to the highest standards while still 15 years old, he could easily have just stayed another fine artist through any of the progressions of his art; but it was his constant development that elevates him in my opinion.

It is hard to categorize Picasso on his whole art catalog such are his different stages of progression.  I have written a little about each of his stages of development here just to try to get to grips with who he was as an artist.

How Picasso Got So Famous

A full answer to Picasso’s fame would take a series of books I think but I will try to cover the basics here on his full career as an artist – as well as why us artists need to study his work and methodologies even if we do not want to follow his cubist lead.

Pablo Picasso was born in 1881. At the young age of 14 years old he painted a “Portrait of An Old Fisherman”.  His father was a fine art dealer so Picasso was exposed to good art from an early age and might have seen it as a way to gain respect from his father in his ability to reproduce some of the arts his father was selling. 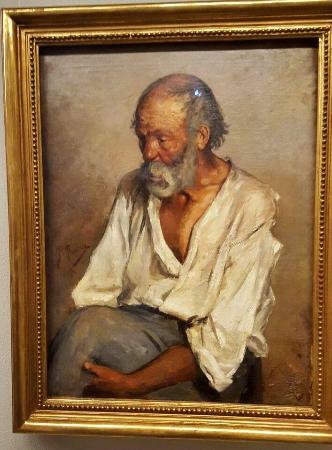 A proper answer to this would require a book. Picasso’s father was a fine art teacher, so young Picasso started his studies at age 5 or so. He was gifted and clearly showed a compulsion for the work. However, when he eventually got to formal art school as a teen, he didn’t last long, preferring to make his own way. He went to Paris, and for many years divided his time between Barcelona and that city, making friends with other young artists, including Matisse, painting but starving. He got involved in publishing an art magazine, became known in the arts community, but didn’t profit.

Then, in 1905, his work came to the attention of Gertrude Stein, a major American art collector, who purchased many pieces. This was the first significant breakthrough. Then, in 1907, he was picked up by Daniel-Henri Kahnweiler, who was starting a gallery in Paris representing all of the young, radical painters – Picasso, Braque, Leger, Vlaminck and others. Kahnweiler was the dealer who pushed this “new art” and these “new artists” into the consciousness of the art world and became one of the greatest art dealers of the 20th century. This was the real turning point.

It was also in 1907 that Picasso painted “Demoiselles d’Avignon”, the painting that arguably changed Western art forever. In 1909, Picasso, continuing to grow, started – with Braque – his advances into Cubism. And the excitement continued, for a long, long time, because by this time, Picasso was established as a force – an innovator.

Although Stein and Kahnweiler are given much of the credit for “making” Picasso and the others – they could not have done so without the genius of the artists – and the cultural readiness of the world to receive the art. It all works together, like a dance.

At 14? It’s a masterpiece that any master in history would of been proud to paint at the Hight of their career.

At 15, he painted the “portrait of Aunt Pepa”

At the age of 18, still in any society an immature teenager, Picasso had very obviously mastered his craft and began breaking the rules and trying techniques no other artist has ever done.

At 20 he joined an art gallery and was becoming one of the favored artists in France. Along with two of his friends Henri Mattise and Marcel Duchamp.

When he heard someone reference the background of a painting as “the negative space” Picasso (working with Braque) wanted to show, there is no “negative” space to a painting. Every brushstroke is equally important as the other. To show this, he painted with NO foreground or background. In 1910 he painted “The Girl with the Mandalin”

and the portrait of Ambroise Vollard.

I know my answer to your question, was not a deeply philosophical nor a historical answer but I hope it helps you understand Picasso, just a tad bit more than you may have before.

Spirits Of The Wild- Wildlife Portraits